A white man got more than he bargained for after going off on a racist tirade while travelling with some black people in a Tube in Central Line on Sunday August 16.

The video which has gotten lots of reactions on social media, came with the caption ‘Being black in the UK is tiring. These black boys just wanted to go home and this supremacist just kept provoking them.’

The man who was seen wearing a black polo shirt and beige shorts identified himself as Billy Steel as he screamed at the group of young black men while swinging from a handrail. He was heard saying ‘This is my home. You’re all going back and you know it as well.’ 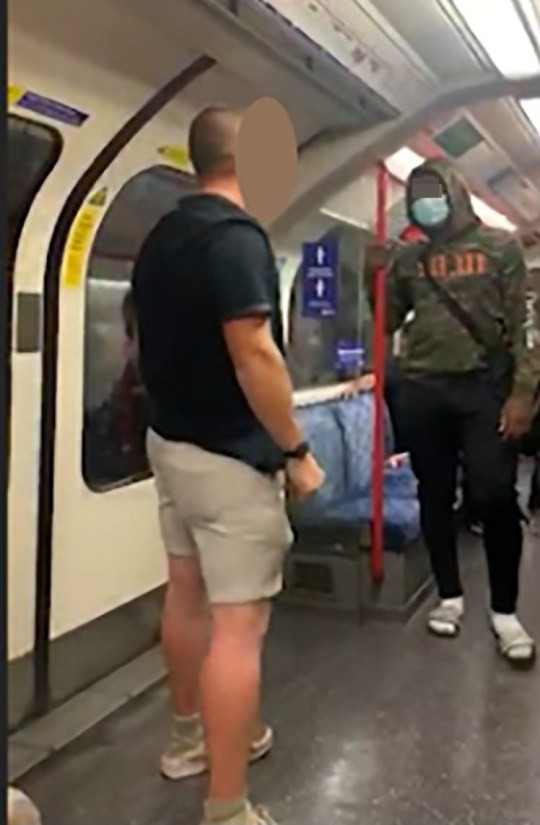 When a passenger in the group asks where they are going back to, the white man retorts: ‘You know where you’re going back.’

Someone then repeatedly asks for his name, to which he shouts: ‘No, you’re black, oh my god’. A woman filming the incident asks: ‘What’s that supposed to mean? What does being black have to do with anything?’

He then swivels around and tells her to shut up. The video cuts to the man repeatedly chanting ‘lesser than us’ while swaying from the handrail, before saying ‘you’re my pets’ to a group of black men.

However as the group of black people tried getting off the train in Bank station in Central London, the man walked up to them shouting ‘come on’. As they get up to leave, the white man squares up to them with clenched fists close to the open doors. One of them suddenly turns and punches him with a right hook.

The man stumbles and falls backwards in the train carriage, appearing to be knocked out. Some of the passengers were heard thereafter saying  ‘well done’ and a woman can be heard laughing, before others rush to check his pulse and put him in the recovery position.

More in this category: « Miley Cyrus reveals she lost her virginity to Liam Hemsworth at 16 Melania Trump pulls her hand away from Donald Trump as she tightly holds onto her $13K Hermès Birkin bag »