One dead and at least 11 injured in Minneapolis shooting

One man has died and another 11 have been injured during a shooting in the US city of Minneapolis.

George Floyd's death at the hands of White Police officers has sparked a move to overhaul the Minneapolis Police Department, prompting backlash from the police and Republicans who question how citizens will be protected from violent crime without the police.

Acording to Police "individuals on foot" started shooting about 12:30am local time and later fled the scene, and not less than 11 people suffered gunshot wounds during the incident that took place on the 2900 block of Hennepin Ave. South. The cause of the shootings and the perpetrators are still unknown as of 4:00am local time according to a police statement.

The area where the incident occured is about 5 kilometres west of the Minneapolis commercial area and neighbourhood hit by rioting in the wake of George Floyd's death .

The area affected include several bars and restaurants near a theatre. 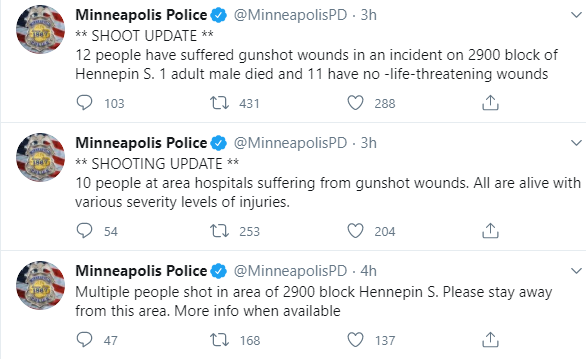