Lionel Messi deserves Ballon d'Or win: He is still the best in the World

Becoming a legend in your own lifetime is a special achievement. Doing so while still playing is something else. Managing to accomplish it while still being the best player on the planet? That takes Lionel Messi.

The Barcelona forward won his first award of the season before he had even started a game - collecting the FIFA Best trophy back in late September. On Monday evening in Paris, Messi walked away with the Ballon d'Or for a record sixth time in his extraordinary career. 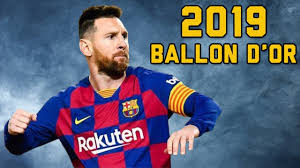 Not everyone was convinced. Some felt Virgil van Dijk's contribution to Liverpool's Champions League success deserved greater recognition. The theory owes a little to logic but a lot to fatigue too. This is the numbness caused by the numbers of Messi.

There have been 46 goals for club and country already in 2019 but for him this is seen as just another year. With good reason. It is just another year by his incredible standards. He has hit the 45-goal mark every single year of this decade.

More in this category: « Lionel Messi deserves Ballon d'Or win: He is still the best in the World No Sight Of Ronaldo As Drogba, Messi, Vandijk Arrive With Family For Ballon D’or »