Jurgen Klopp - Coach of Liverpool - the best team in the world presently, is not Afraid of Coronavirus.

Liverpool coach Jurgen Klopp has allayed the fears of Liverpool fans who are worried that the government might cancel the premier league season due to the coronavirus outbreak, thereby denying Liverpool the opportunity to win their first English Premier League title.

Liverpool have had to wait since 1990 to win a league title and have never won the Premier League. According to reports, fans of Liverpool are scared that the EPL results this season might be cancelled as fears of the spread of the deadly coronavirus has forced sporting events around Europe to shut down.

Though there is no legislation in place stating that the final league standings this season be curtailed prematurely, Klopp has rubbished suggestions his side could be denied the title this season. 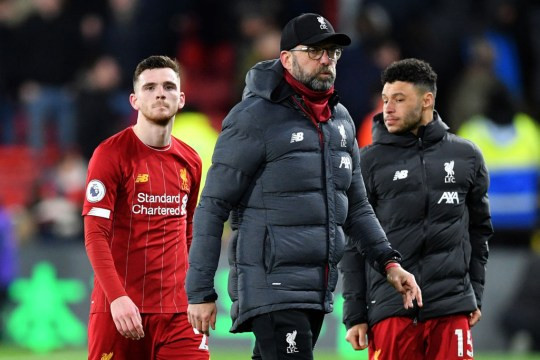 Klopp speaking to reporters on Monday said: ‘I don’t think that our fans are paranoid, I think people who are not interested are bringing up these stories. ‘I can’t believe that Liverpool fans are thinking about it, and I actually speak to Liverpool fans.

'If anybody wants to ask me about that, and how much sense it would make to delete all the results of this season and tell me who will play next year Champions League and stuff like this. Would be really interesting. ‘Nice story, always obviously some newspapers they always have to write something.

‘But when I saw it first time I really thought, “Wow! Really somebody thinks something like that?” But Liverpool fans are not silly enough to believe in these things.’

Liverpool maintain a 22-point lead at the top of the table.