Former Minister of Aviation, Femi Fani-Kayode, has demanded a N6 billion compensation and an apology from Daily Trust newspaper over claims of defamation.

In a letter signed by his counsel, Adeola Adesipe,  and titled, ‘Defamation of the Character of Chief Femi Fani-Kayode by Iliyasu Gadu’, FFK said it is in response to a publication by the newspaper titled ‘FFK, the Drug Addled Thug in Designer Wears’ which was published on August 29.

The article in part reads

''His bohemian lifestyle while in the United Kingdom included an addiction to drugs for which he had to seek spiritual and physical rehabilitation in Ghana. But till today he has not been totally cured of that habit which leads him to fits of boorishness, irascibility and thuggish behaviour unbecoming of the status he occupies in Nigerian public life.

Though he likes all too often to take pride in and show off his English public education as a badge of honour, unfortunately FFK does not live up to the genteel and hallowed requirement of an Oxbridger in all he does. In the public space which he courts and hugs for recognition and relevance he is always expected to exhibit his base, yobbish, uncouth manners of an alley cat at persons who are his betters in all parameters of life.''

The publication came following his clash with one of the newspaper's reporters, Eyo Charles, at his press conference in Cross River state on August 20. Charles had inquired from the former Minister who was bankrolling him for all the tours he has been embarking on in different states in the South. FFK got insulted and lashed out at him, describing him as ''Stipud". He has since apologized.

Reacting to the publication, FFk in the letter signed by his counsel, said the newspaper’s publication defamed him and has caused him ‘immeasurable loss of goodwill’. He stated that the newspaper should enter into a negotiation for the payment of N6 billion as damages.

“You are also advised to enter into negotiations with us for the sum of N6bn being a token amount for penitence as opposed to the magnitude of infraction caused to our client’s nobility,” the letter read.

Apart from the N6 billion to be negotiated, the former Minister further requested that a letter of apology must be published by the newspaper and on two other national dallies.

“Our client is alive to his rights both in law and equity but is disposed to an opportunity to undo the evil you have done by retracting the said insalubrious remarks on the same platform it was published and apologising to him in two other national dailies,” the letter further read.

The former minister gave Daily Trust Newspaper a 14-day ultimatum to comply with the demands in the letter or face legal action.

See copies of the letter sent to the media house below 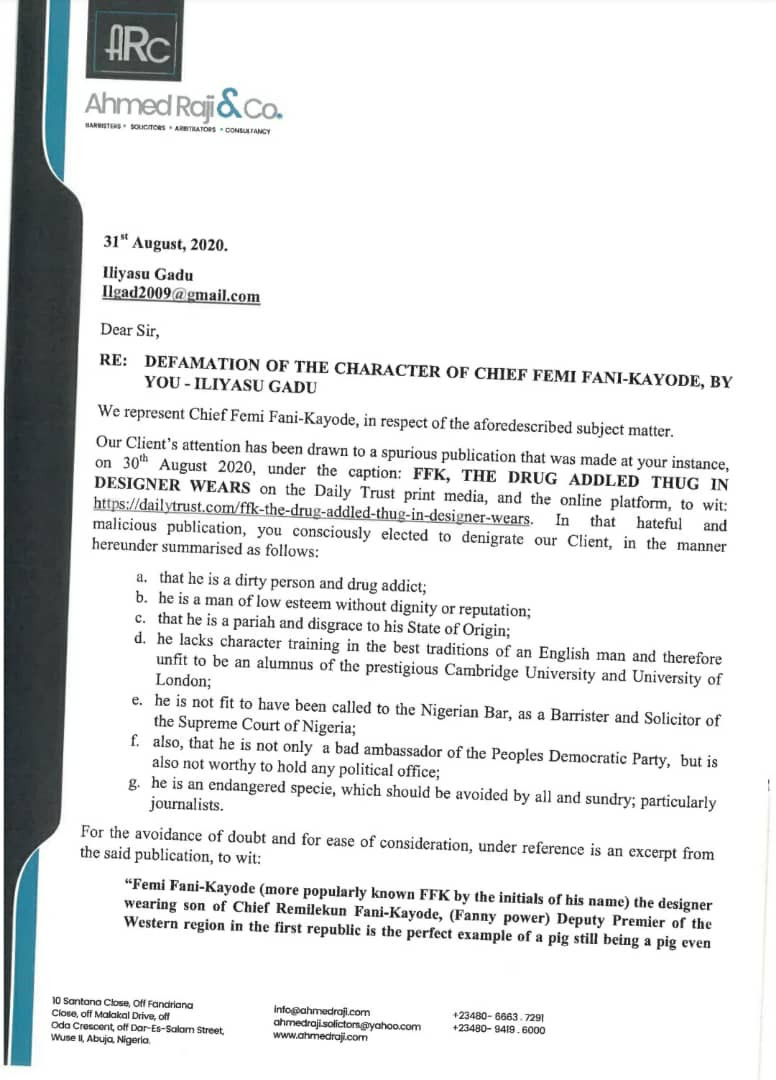 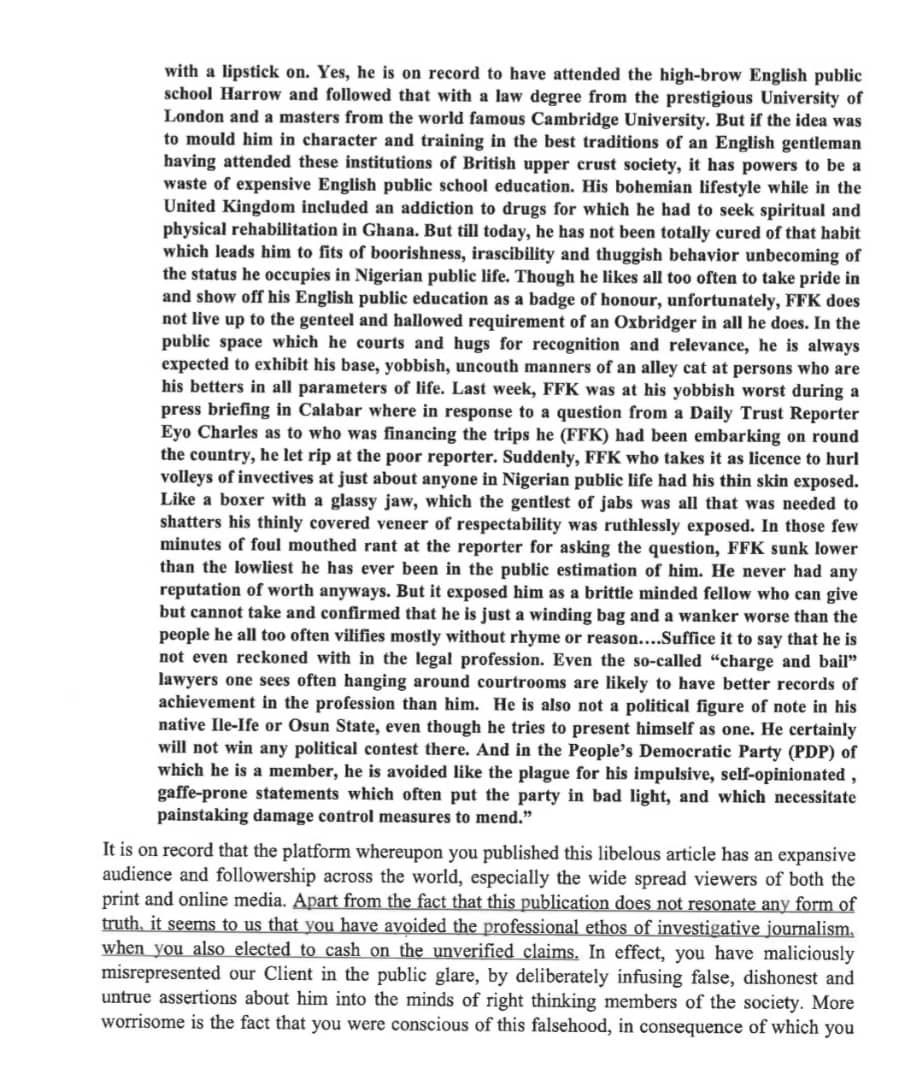 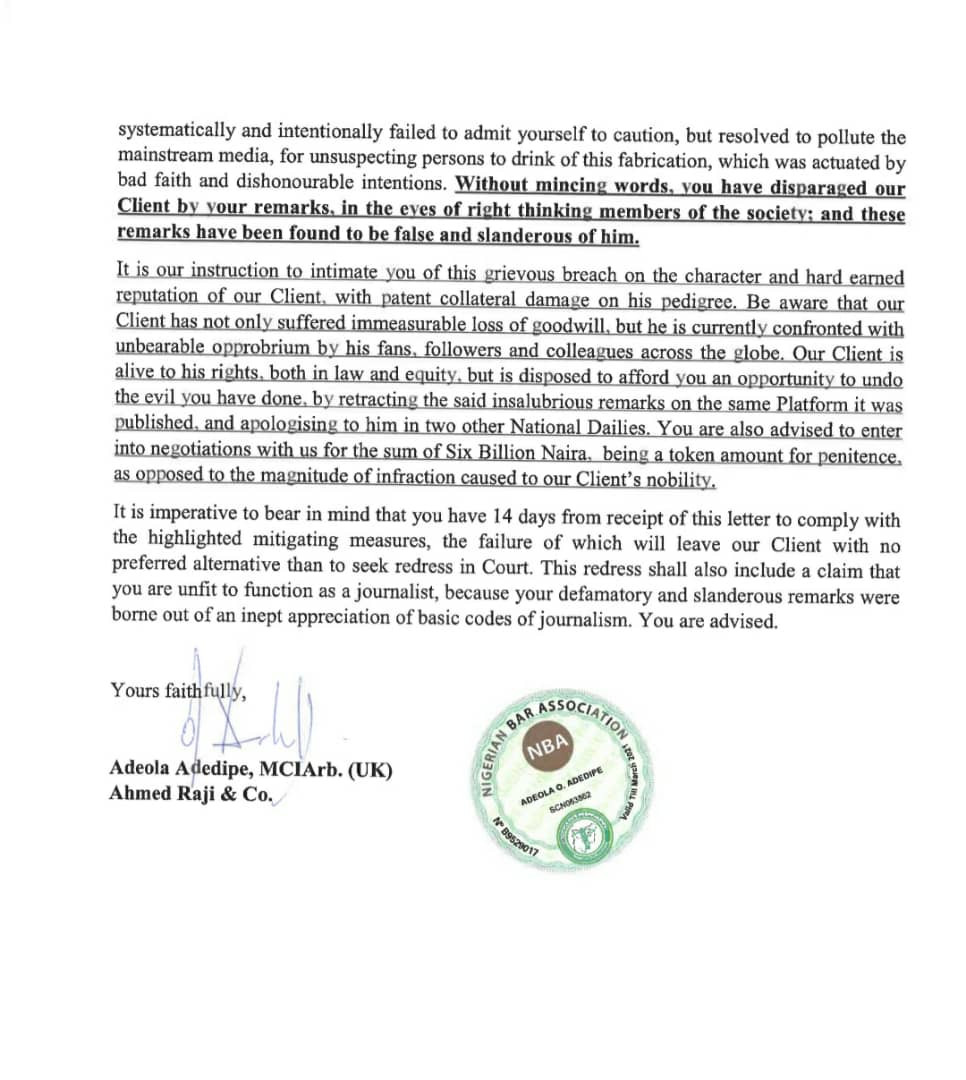