Black man attacked by a group of white men in Indiana

A Black man was almost lynched by a group of white men in Indiana over the weekend.

The man, Vauhxx Rush Booker took to Facebook to detail the Fourth of July attack which occured near Lake Monroe on state-owned land on Saturday, July 5.

Video from the scene shows several white men holding Booker on the ground against a tree while two white women can be seen pleading with them to let him go. Some of the white men were also heard using racial slurs directed at the person filming the incident.

In a lenghy post, Booker said he decided to hang out with some friends to watch the lunar eclipse at Lake Monroe. On their way to the park, a white man who Booker described as “seemingly drunk,” and was wearing a shirt with a confederate flag printed on it, approached them.

“We noticed he began following us in an ATV and we stopped as he drove up behind us and then stated we were on private property,” Booker wrote. “We relayed to him that we believed the organizers had received permission from the property owners to cross, but apologized and went on to our beautiful site just off the water without any further incident. When we arrived, we told the event organizer of the encounter and it was relayed that the individual wasn’t the actual property owner and the organizer apologized.”

As they decided to leave, Booker said more white men came to the scene and “quickly became aggressive,” telling them to take the trail. Moments later, the men attacked him and knocked him to the ground, where they pinned him down for several minutes.

“I tussled with the two and another one joined in, then two more,” he continued. “The five [men] were able to easily overwhelm me and got me to the ground and dragged me, pinning my body against a tree as they began pounding on my head and ripped off some of my hair, with several of them still on top of my body holding me down. At one point during the attack, one of the men jumped on my neck. I could feel both his feet and his full bodyweight land hard against my neck.”

When some bystanders tried to help Booker. The attackers reportedly told the group, “We’re going to break his arms” and instructed their friends to “get a noose” before they finally let Booker go.

Booker alleged that the Indiana Department of Natural Resources (DNR) police were dispatched to the scene after his group called 911. But when the officers got there, they refused to make any arrest or charge the attackers even after witnesses showed them their video evidence.

After footage from the scene went viral, the mayor of Bloomington, John Hamilton released a statement via his Facebook page.

He condemned the attack and said he had contacted Gov. Eric Holcomb over the incident and would continue to demand justice.

"These incidents affect us all, and I have reached out to the Governor, Prosecutor, and the victims in order to advocate for my residents who were victims of these great injustices. Although neither event occurred inside the city limits, under my jurisdiction, I will continue to call for and demand justice," Mayor John Hamilton wrote 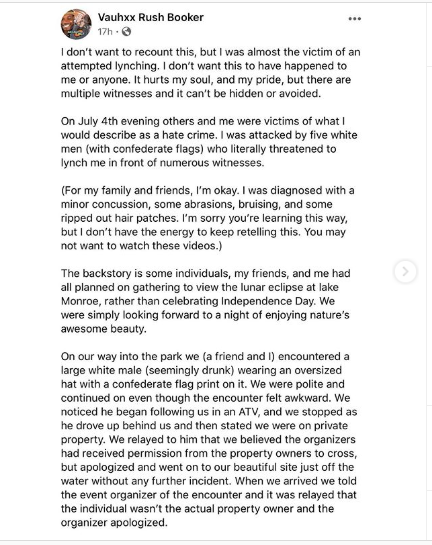 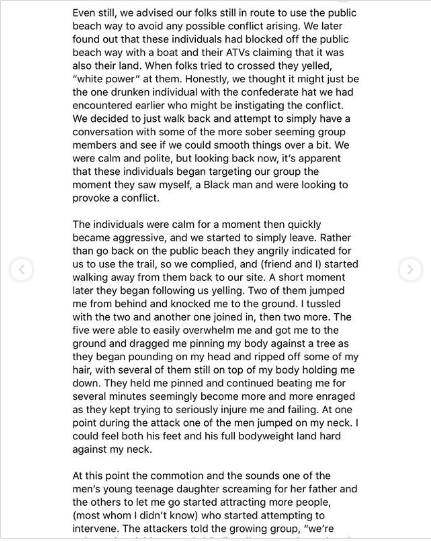 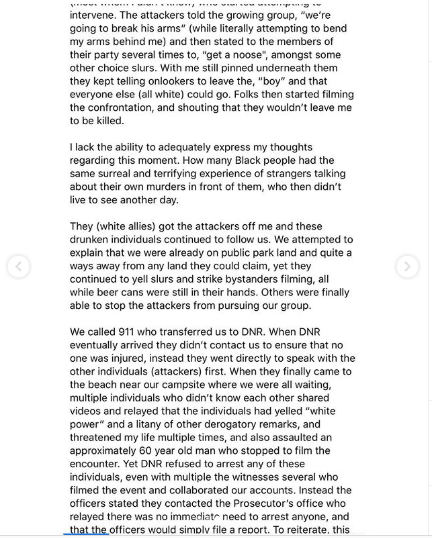 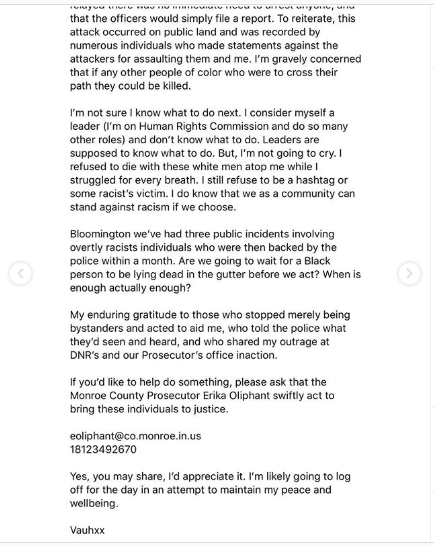 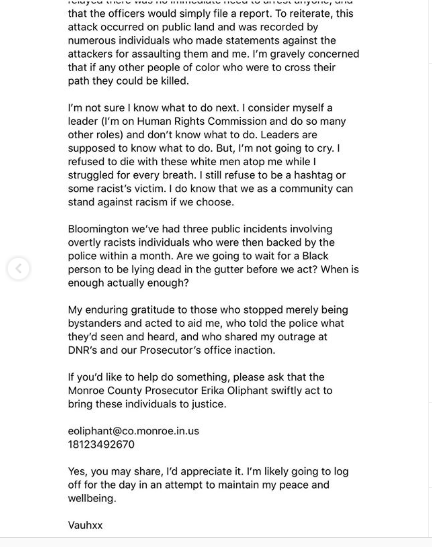